The Downs are administered by the City of London Corporation. The Friends work in partnership with the City of London, and in addition to helping shape projects like the new proposed visitor facilities and organising talks and guided walks, there are many other ways the Friends can help protect and enhance this unique site.

To find out more about the Friends visit their website.

The Downs are administered by the City of London Corporation. Farthing Downs and Happy Valley are in the heart of the East Coulsdon Area which is a short walk from Coulsdon South Station and the bus stop at Marlpit Recreation Ground and is a Site of Special Scientific Interest.

They were acquired through the Epping Forest Act and the Open Spaces Act – adopted in 1878 as a result of concern about building development and is in the heart of the Green Belt. The legislation enabled the Corporation of London to acquire open spaces within 25 miles of the City for the ‘recreation and enjoyment’ of the public’.

The Downs cover 120 acres which is largely grassland. In summer it is a riot of colour. There is a well sign-posted circular walk. The City Of London Rangers’ conservation work includes the management of cattle and sheep to ‘mow’ the grasslands re-introduced to The Downs a few years ago.  They have put up new benches whose tops are made from felled trees; maintain the fencing and often give talks and lead walks.

If you would like to get involved in hands-on outdoor work why not think about helping the Rangers on Farthing Downs, the work is rewarding and you can help to conserve and protect an important wildlife and archaeological site..  Contact the City of London’s Ashtead Office on 01372 279083 or e-mail

Health Walks – We run regular walks on Farthing Downs and Kenley Common throughout the year. For further information, please ring us or go to the Walking for Health website http://www.walkingforhealth.org.uk 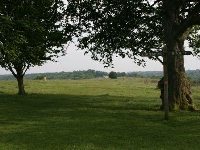 This is the link to The Corporation of London website for information on West Wickham and Coulsdon Commons. http://www.cityoflondon.gov.uk/Corporation/LGNL_Services/Environment_and_planning/Parks_and_open_spaces/West_Wickham_and_Coulsdon_Commons/West+Wickham+management+plan.htm

A fund raising campaign by the Coulsdon Green Belt Action Group helped the acquisition of Woodplace Farm Fields, now managed by the City as a local open space. In 2006 the Friends won funding to support an archaeological survey on the Downs carried out by volunteers organised by English Heritage. We currently have contact with local schools with a view to organising a programme of walks for children which will complement their school work.

A Celtic field system was discovered in 1939 during the building of anti-aircraft trenches. In 1948 and 1949 a Saxon cemetery was discovered dating from the late 6th and 7th centuries. Some 20 burial barrows were found, along with many other flat graves.

There is a Folly at the top of the Downs (shown in part in the first photo above) with a sign post pointing the way to Coulsdon, Hooley…….

The photo also shows in the background the Millennium Cairn which contains a time capsule and has a metal plate giving pointers to various places of interest. The cairn was unveiled in October 2000. From here there are magnificent views all around.

The Corporation re-introduced cattle to The Downs in 1994 as the most efficient way to maintain the land as traditional chalk grassland.

The road over the Downs was the original Brighton Road before the Prince Regent instigated the building of the new Brighton Road – now known as the A23 – so that he could get to Brighton and his Pavilion as quickly as possible.

If you follow the road towards Chaldon you will pass a house which was originally a Coaching Inn. Sadly the swing boats which were once here have long since been removed Further on this road you will come across the ancient pre-Norman Chaldon Church which was recorded in the Doomsday Book.

Happy Valley (shown in the second photo above with the third photo showing the bluebell wood which connect Farthing Downs and Happy Valley) was only turned into an open space in 1937 and 1938, when various local farms were bought by Coulsdon Council as part of the London Greenbelt scheme, which sought to limit the spread of London by preserving a ring of open countryside around the city. It is a Site of Special Scientific Interest for its flora and as a habitat for ground nesting birds such as larks