Some believe that the Association was inaugurated just before the Second World War in 1939; unfortunately, it’s a little hazy and there’s no evidence that ECRA continued to operate during the war years. Another theory is that ECRA began immediately after the War. The earliest Review, which was a folded sheet of typed paper, is dated September 1948 making us 70 or 80 years old.

We do know that ECRA began life as a ‘Rate Payers Association’ and possibly fielded independent candidates at the local elections. Looking through Reviews in the Local Studies Library in Croydon, there are articles giving residents gentle reminders such as not to cause a nuisance by playing loud music or lighting bonfires. These early newsletters also report on ‘The East Coulsdon Cricket Club’ which played at the Memorial Ground (known as The Rec) and had some very successful seasons between 1947 and 1950.

Can you help us trace any further history of ECRA? Any photographs, information or early Newsletters will be very welcome. 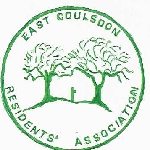 The first issue bearing the familiar ECRA logo of the then two remaining trees which made up the Folly on Farthing Downs is No.104, May 1989. Issue no 103 is missing from our records so it may have appeared on that issue, but it certainly was not used on issue 102 or before then.

The logo was designed by Mr Mike Blake of the Old Coulsdon Residents’ Association. The design was transferred to a printers block for use by Denyer’s Printers in Kenley where the Review was typeset and printed. (At this time the most important role for the Review was publishing the dates and times of the twice yearly rolling rubbish collection). But this was before the age of desktop publishing. The Review has been ‘type-set’ on computer at home since May 1991 and the logo was digitalized at that time by copying pixel by pixel keeping true to the original design.

Sadly one of the iconic trees was burned down in the summer of 1995 so for the 1996 June AGM residents where invited to submit designs and vote for a new logo or keep with the original. Four new designs were received, however, members present voted overwhelmingly to retain Mike Blake’s design.

Advertisements were re-introduced to help publishing costs in February 2001, the first advertisement being Cheesman’s Plumbers which appeared on the back page. In the summer of 2005 Croslink, the printing section of the Council-run sheltered workshop was closed and as a result production was transferred locally to Advanced Print in Brighton Road. It was agreed at the June 2005 meeting that the advertising portfolio would be increased. The first to join Cheesman’s as regular advertisers, were Coulsdon Home Hardware and John Brown.