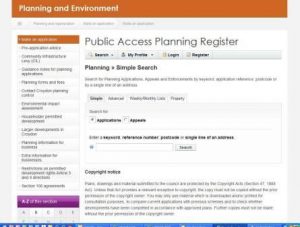 If you wish to investigate current or decided Planning Application you can do so on The London Borough of Croydon’s Public Access Planning Register.

Fill in the details – address of, if you know it the Planning Application Number  omitting the year and the /P and only entering the five figure unique number.

You can obtain a single planning application or for a particular address or, in the advanced search a range of dates.

The Interactive House and Interactive Terraced House are also there but you can access directly if you follow the links below. 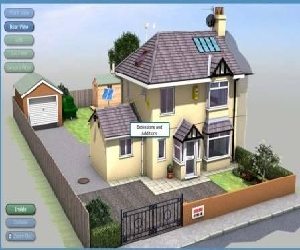 The Planning Portal have an Interactive House and an Interactive Terraced House on their website which can help guide you and give advice on what requires approval from the Local Authority and what is permitted development. You just need to point your pointer on screen to any part of the house and a short Guidance Note will appear from which you can follow the links to more detailed advice should you wish.:-

A reminder to residents that trees and hedgerows require maintenance.

The glorious summer weather brings the opportunity and the necessity of maintaining our gardens.

We are fortunate to live in a particularly green area of the borough.  However, what may be pleasing to some people can cause issues and a nuisance to neighbours, especially if vegetation is hanging over public footpaths.  Overgrown hedges, for example, can mean that those on mobility scooters or those with child buggies may have to venture into the road just to pass that large bush that may be being cultivated for the next Chelsea Flower Show!  If you live close to a road junction, please also consider that overgrown trees can hamper vision and potentially be a contributing factor in accidents.

Trees and hedges in our back gardens, especially if their height can negatively affect a neighbour’s enjoyment of sunlight, also need to be cut back and maintained.  Croydon Council suggest that hedge growth is kept below the 2 metre mark, so please do consider the impact on your neighbours on either side and on the neighbour whose garden backs on to yours.

We live in such a beautiful part of the country, surrounded by woodland and stunning gardens, however, with such beauty comes responsibility too.  So, on behalf of our members, all we ask is that you take the time to maintain hedges and trees so that they don’t become a nuisance to your neighbours.

Thank you to everyone for assisting with the collection of evidence for the parks and green spaces.  There was a tremendous response with approximately 250 additional green sites around the Borough suggested that people believe should be considered for Local Green Space designation.

The next step is to match together data from the main survey together with the Evidence and Evaluation forms that were completed and ensure each green site has its own evidence piece.  The compilation of evidence pieces will be available to view during the autumn consultation period.  Meeting the third criteria of ‘being of particular significance to the community’ will be the focus of analysis because this is the criteria the Planning Inspector is most likely to review closely.  Ahead of the consultation period, a list of sites believed to be in need of further evidence will be compiled to demonstrate this criteria.  Opportunity within the consultation period will be made for the evidence to be submitted.

Croydon Council’s Authotities Monitoring Report has now been updated and can be viewed following the link below:

A planning application has been made proposing the demolition of TWELVE terraced family homes  on Whytecliffe Road South (The road on which the main entrance to Purley station  on) to make way for an enormous 8- STOREY APARTMENT BLOCK WITH 106 FLATS!

This is not in keeping with the local area and the parking and traffic in Purley will be made even more terrible, plus the privacy of the residents etc will be completely lost.  This is the row of houses on the approach to Purley train station which they propose knocking down.  Further information and the location can be viewed here:

https://publicaccess3.croydon.gov.uk/online-applications/applicationDetails.do?activeTab=makeComment&keyVal=PU6D1LJLMNS00 OR you can email: quoting application number: 19/03142/FUL.

Representatives from the Residents Associations (RAs) of Hartley & District, Old Coulsdon, Coulsdon West, East Coulsdon, Kenley & District, Purley & Woodcote, Sanderstead and Riddlesdown have been in discussions with the Croydon Clinical Commissioning Group (CCG) regarding the provision of urgent care facilities within the Borough of Croydon and in particular regarding Purley Hospital. The RAs have had several meetings with the CCG, involved Croydon HealthWatch, local MP Chris Philp and have also written to Jeremy Hunt, MP; the Secretary of State for Health. However, following a re procurement report issued by Croydon CCG on 1 September 2015, the RAs have now on 20 October 2015 wrote to all 16 Croydon CCG Governing Board members expressing grave concerns about this report; a summary of which is below.

In January 2016, the 16 members of the Croydon CCG Governing Body will be asked to make a decision on the future of urgent care provision in Croydon. This is a once in a generation opportunity to provide a comprehensive and effective urgent care system for Croydon. The Governing Body will be asked to make this decision on the basis of a CCG re procurement report dated 1 September 2015. This report gives 8 scenarios, which appear to polarise the decision between Walk-in Urgent Care provided at GP practices, or at Minor Injuries Units. The RAs believe there is another option, which is a combination of extended GP practices and a walk-in Urgent Care Centre at Purley Hospital.

Purley Hospital was redeveloped with £11m of public money in 2012/13 to provide improved outpatient facilities and an Urgent Care Centre for the local population. The redevelopment was conceived with the intention of providing a walk-in urgent care facility, and hence the site is already suitable:

In February 2014, the Council withdrew the steam cleaning of the pavement due to their cuts.  This has resulted in the pavement being in an appalling dirty mess and a health hazard.  ECRA along with the other RAs and business groups are pressing the new administration in Croydon to re-introduce the steam cleaning under this and other railway bridges.  We are also pressing Network Rail to improve the pigeon proofing of this and other bridges in the area to prevent the pigeons gaining access. We continue to press for this to be done.  They have improved but has not resolved the problem.  We are therefore pressing for further improvements.

After Lengthy campaigning, Croydon Council installed two CCTV cameras in the centre of Coulsdon.  However, these do not give a clear view of the northern part of the Town Centre, Chipstead Valley Road and Lion Green Road.  East Coulsdon Residents Association is campaigning for additional CCTV camera to cover these areas but so far the Council are refusing to install additional cameras.  We continue to campaign

The names of the road in phase one are all names after the old wards of Cane Hill Hospital, these include such names as Chauce, Olave,  Paxton and Salisbury etc.We are also pleased that, after discussions with Barrett Homes and Croydon Council the main spine road was named Cane Hill Drive and not Cane Hill Road as originally proposed. Other names are of people who have been connected to Cane Hill in the past.

Below is a link to Cane Hill development.

ECRA,, along with other representatives from Coulsdon met with Brick by Brick about 18 months ago and several times since.  The plans for these three sites (they later split the Calat Centre site into two) were: –

Therefore only 30 to 50 public car parking spaces in total.

We suggested that instead they:

Brick by Brick have agreed to these changes and there will be 116 public long and short-term parking spaces.  Not quite 120 but we are still working on that.

The four Planning Application were approved by the Council.

Whilst the Residents Associations and the residents would much prefer LGRCP to remain as a much loved car park THIS IS NOT GOING TO HAPPEN, whether Labour, Conservatives or other are in power. The Mayor of London  is changing his London Plan (which supersedes Croydon’s Local Plan) to insist that Croydon build 10,000 more homes on top of the 30,000 already in the pipeline and that those are to be mostly high rise flats and little or no parking – public or private. He already objected that there are already too many parking spaces proposed on LGRCP in the current plans.

The compromise plans on offer are the best of a bad job and, unless you want worse which is threatened coming down the line from the Mayor then it is up to the residents if they want to keep on fighting.

Whilst there are justifiable concerns about the infrastructure problems these and other planning developments already in place will and have caused –  ECRA and the other RAs are also concerned -, the proposed Health Centre will at least partially address medical provision. We continue to fight for a A23 exit from Cane Hill.